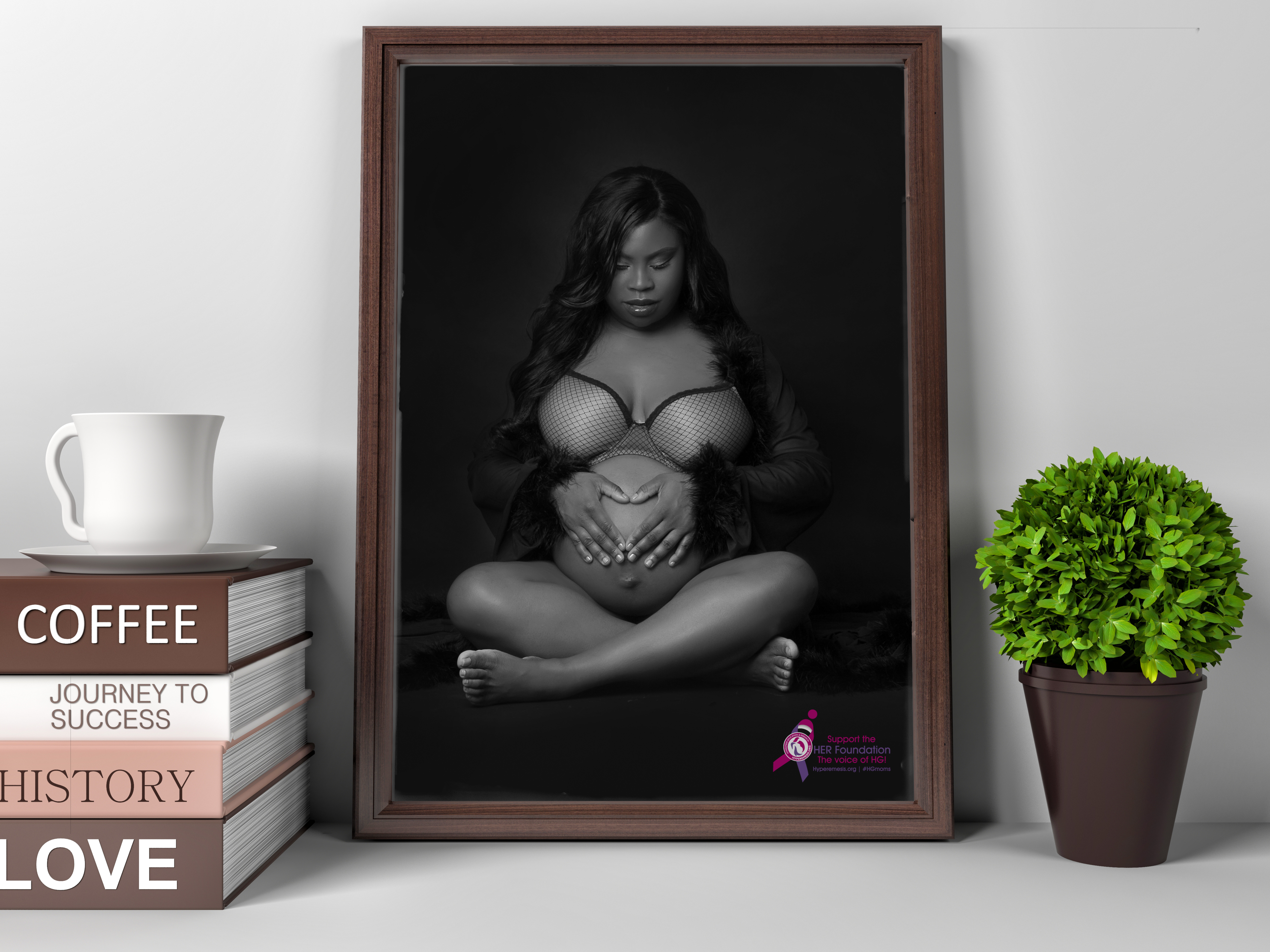 Hyperemesis Gravidarum, also known as HG, a term I briefly mentioned in a few of my post, is more than morning sickness, in fact IT IS NOT morning sickness at all. Now what does this have to do with the Duchess? No, I have not lost my mind. No, the Duchess did not exactly steal my life, but we have some life similarities, other than the fact we are both royalty 👸🏾(DO NOT ARGUE WITH ME😆, I’m over here writing this sipping my tea☕️, this is my world now, 😂🤣.) On a serious note, I mention the Duchess because she in fact is the very first, well-known person of status, who publicly struggled with having this condition. So before I get into the seriousness of this post, here’s some fun facts:

Now that I have shed my alternate reality😂, let’s get back to actual reality, LOL. Hyperemesis Gravidarum, HG as I will refer to it from this point on, is no joke. HG as defined by the American Pregnancy Association, is a condition characterized by severe nausea, vomiting, weight loss, and electrolyte disturbance. I had HG with both pregnancies and that experience lead me to the decision of tying my tubes. Tubal ligation was never a thought for me until I got pregnant and suffered through HG. I actually wanted three kids (I even entertained the thought of 4 children), but here we are at 2 children because of HG.

I was excited when I found out I was pregnant with Charlotte, by my 9th week I started getting sick. At first, everyone told me it was morning sickness and it would go away by my 12th week. Week 12 came and left, I got sicker, which resulted in me getting to work late. Friends started telling me I should get relief by the 15th week; week 15 came and left, sickness was getting worse. I was confused because everyone told me morning sickness is nausea, and there is a stark difference between nausea and vomiting. This was not just nausea, but not knowing any better, I kept hoping it would stop. I reached my 20th week, throwing up several times a day as if I had been suffering from food poisoning (bucket switches were involved, Thank God for my loving husband); it became clear, this isn’t going to stop. Finally, a friend told me to say something to my OB, so I did, and he prescribed Diclegis. It helped a little, but it sedated me; however, it did not cease my suffering. To make matters worse my insurance refused to cover it and it was $500 for a 30-day supply!

My HG was so bad and unpredictable that I almost lost my job, because I wasn’t informed (nor did I have the energy to do my own research) of what my options were with such an illness. I was chronically late or calling out; it was horrible coping with this illness. I was told if I went out on FMLA for the condition I would essentially be using my 12 weeks maternity leave. It was also implied that I would not be covered medically afterwards. Later I realized that information was far from correct (don’t worry your girl did in fact get the correct information for baby number 2).

I was on childcare leave for my 37th birthday. I wasn’t in the mood to celebrate (not typical of my dramatic Leo self.) A few days before my birthday, I text my husband because I thought my dysmenorrhea was returning and all I wanted to do was vomit (which was normal for me.) My birthday came, and I was feeling so under the weather, the thought of taking a pregnancy test came to mind, but I was feeling cramps, I laughed at the thought and took a nap. The next day, I decided for laughs to take the test, since it was going to expire soon. THOSE LINES lit up that test up so fast, I was in shock! I was 8 months postpartum and breastfeeding, what the heck!?! Translation my HG was back and was ready to rock and roll, worse than the 1st time. This time I knew what I was in for and was more prepared. When we confirmed my pregnancy that week, I was only 4 weeks pregnant, and I knew this was going to be a rough 9 months. I was prescribed Reglan and Diclegis to get through the pregnancy with a baby/toddler and work.

As the American Pregnancy Association described it, HG in fact is severe vomiting. It is NOT normal, it is not a necessarily a short occurrence; in fact it disrupts your entire life and is often unpredictable when it will strike. I remember one day at work, I was in the bathroom crying and heaving, on my knees throwing up violently for 3 hours. Yes, I was in my work bathroom throwing up for three hours. Yes, I would get a few minutes break here and there, just to start throwing up the water I was sipping on. It was rough. I was scared. I didn’t want to get dehydrated and I think my fear made it worse. The medication just did not work that day. I called my OB, they said if I can’t stop the vomiting soon, I would have to go to the hospital to get an IV. I called my father-in-law, he came and got me. I had my gallon size Ziploc bags in the car, ready to catch. I made it home and I started feeling better. I drank SmartWater (it has electrolytes and I do not like pedialyte) and I was spared the hospital visit, that time at least.

“It will get better”, “it goes away”, “Drink ginger tea” “Eat ginger candy”, “Have Crackers”…. The list goes on, and let me tell you, NOT ONE OF THESE THINGS WORKED. I started getting sick in May 2016, it is now May 2019 and I can not stand GINGER ANYTHING to this date because that is all I had in an attempt to get relief. HG is NOT morning sickness. AGAIN, HG IS NOT MORNING SICKNESS; morning sickness is mild, does not result in vomiting and goes away. HG, for me did finally go away, on December 8, 2016, and April 23, 2018, respectively. Yes, I had it until both girls were cut out of my womb. Silver lining to any HG mamas reading this, there is an end date, you just have to reach it.

I recall one night, 2 weeks past my due date, waking up at 3am, alone. My husband was working midnights, and I was throwing up for 45 minutes straight while peeing on myself. When you are pregnant and have to vomit, your stomach contracts on the baby which presses on your bladder and then without your consent you pee. So when I was about 6 months I started wearing Depends. It was already bad enough I was throwing up, ya girl was not getting caught in the streets of NYC with pee on her. (BTW, I’m only giving you snippets there are so many details I am withholding just to keep this short as possible, I can write a book entitled “My Journey with HG”.) Even on the day of one of my maternity shoots, I had an episode right before I needed to leave and I had to get makeup done and was late. Oh, I was also late to my baby shower because I had an episode. Let me tell ya, HG don’t care about your plans at all.

Why am I going into all of this? Because, I never heard of the condition until I was suffering. I had very little support. I heard things like “you are pregnant this happens” NO, this shouldn’t happen and to make matters worse employers have no compassion. Alternatively, If I went to work and said I was getting chemo and was having bad reactions to it, people would be more receptive and empathetic. Being pregnant in the workforce is hard, being pregnant with a pregnancy illness feels like career suicide.

After Kate Middleton announced her illness, I started seeing a slow, but steady increase about the condition. Recently, Amy Schumer (the only American celebrity I heard about so far, I did see a social media YouTuber MsVauganTv tell her story) announced her struggles with HG. There is still little information and support about a condition that has no known cause. Unfortunately for me, I fell in the 20% of women that require care for HG throughout the rest of their pregnancy.

Some facts about HG:

Hyperemesis gravidarum (HG) is a severe form of nausea and vomiting in pregnancy. It is generally described as unrelenting, excessive pregnancy-related nausea and/or vomiting that prevents adequate intake of food and fluids. If severe and/or inadequately treated, it is typically associated with:

My struggle with HG was tough particularly because I didn’t know I was suffering from it, and I was told by friends it was morning sickness. Being unaware and feeling like something is wrong with you, not being able to cope with daily activities is hard. Mentally I felt defeated and couldn’t understand why I was failing so badly, not knowing it wasn’t morning sickness. Finally, talking to my OB and having an extremely supportive husband is what got me through my battle with HG. I eventually went out on FMLA maternity leave 3 weeks before having Charlotte because I couldn’t manage and 8 weeks before having Alexandria (I knew my rights this time around) because it was worse, even with the two medicine regimen. It was mentally and physically exhausting.

There are so many pregnancy complications and ailments that are not discussed. Let’s start having the conversation; support can mean the difference between making it or not. There have been women who have terminated their pregnancies because of this condition. HG is more than morning sickness. The Duchess missed her son’s 1st day of school because of it, and she has the means and support, what do you think it is costing others? Let’s spread awareness, compassion, and support for women and the research.

🔗HER (Hyperemesis Education Research) is a Global organization for HG

🔗HER Tools for HG Management

🔗PSS (Pregnancy Sickness Support) is a UK based organization for HG

🔗Kate Middleton Is Pregnant And Suffering From Hyperemesis Gravidarum Again

« Having a Bad Mom Doesn’t Mean you will be a Bad Mom – How Foster Care Saved me.

The Struggles of the Unknown of HG »