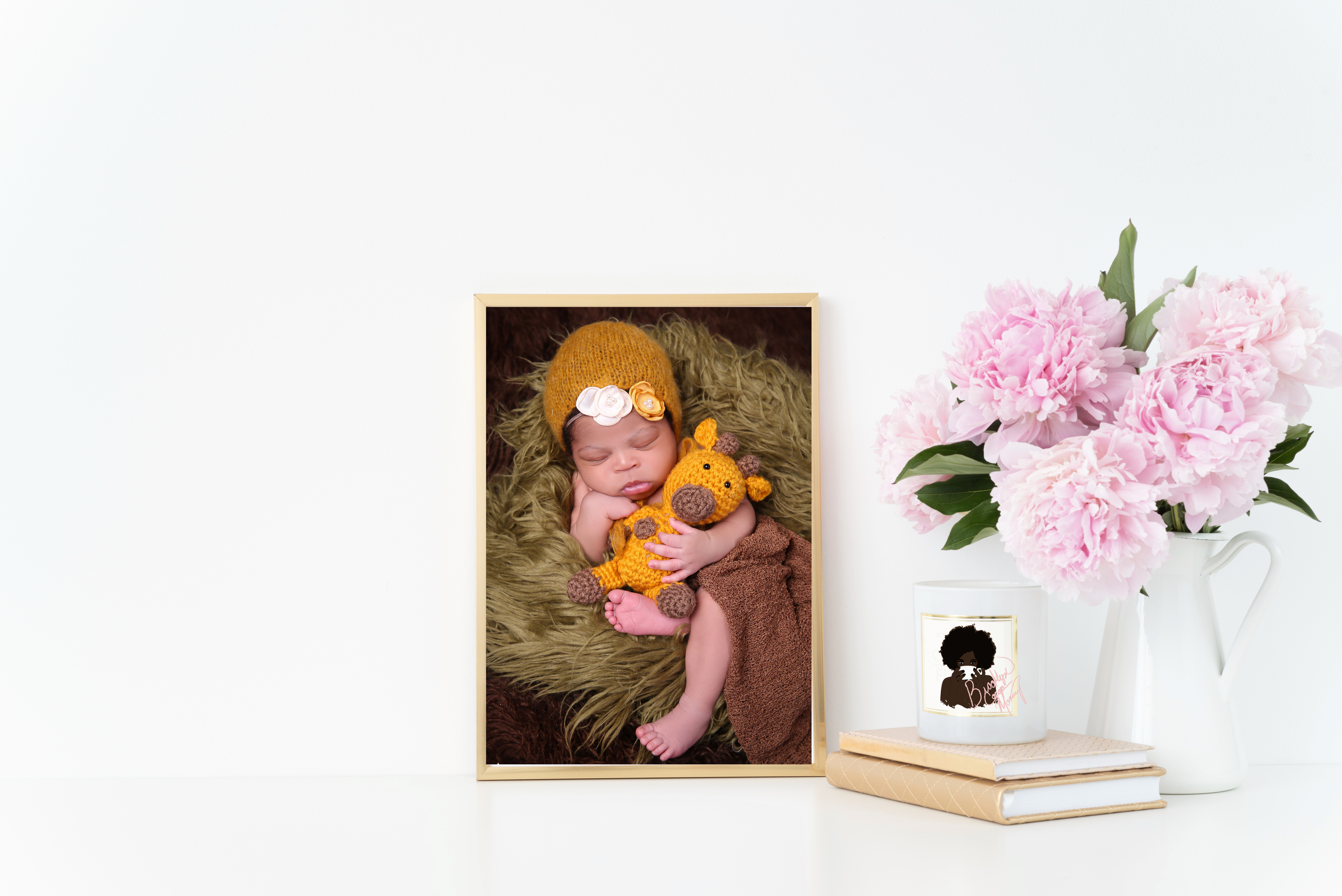 December 7th, 2016 my HG was at its height. I was up to vomiting about 3 times a day for about 45 minutes each time. It was like experiencing food poisoning without eating. It got so bad that one night my bother-in-law heard me from a level below, and I think I scared him. My husband was working midnights and it was 3 something in the morning. I was alone, I didn’t have help, could call for help, couldn’t text for help. I was holding my stomach and crying uncontrollably. I wanted this to be over so badly. I just kept telling myself it will stop soon, it will pass, but honestly it felt like an eternity. (This is what my pregnancy was like from week nine until she was born)

At this point I was on maternity leave because I could no longer cope and the episodes were increasing rapidly. On November 29th, my due date I was told we were going to wait it out until December 7th (I wanted to cry, I was tired of suffering from HG) I wanted this child badly, but this condition was taking a toll on me. Emotionally and psychologically I was exhausted it seemed very few actually understood what I really was going through.

Fortunately, my husband was and very compassionate towards me. He helped me during my episodes, he would clean up afterwards, he would help bathe me. It was so hard for me to accept this type of help, no one wants to ever feel like they are helpless… Nevertheless, I’m grateful for him.

So, December 7th, still not dilated, no water break, nothing… Just me vomiting as usual. I called the Dr that morning, he told me I could eat up until 11pm, and to go to the hospital at 11pm to be admitted, I would be induced using Cervidil (Dinoprostone). The process was explained to me and I was ready to deliver this child.

I lived 2 blocks from the hospital, so we walked there. Because I’m mad greedy, I had my husband order food at 10:30 and I ate it as I walked to the hospital (I know, I’m ghetto, lol) I literally was finishing my food up as I was filling out the medical forms. I hate being hungry and had no clue when the next time I would eat again, so a sister was taking these instructions very literally.

When we finally were in the labor room the hooked me up and inserted this tape looking this inside me and the waiting game began (was told this was a 12 hour process.) I think an hour in I got hungry and started snacking on the cheetos I snuck in (yes, I’m greedy and knowing I couldn’t have food made me hungry.)

I fell asleep, the hubby went home, and I woke up a few hours later, nauseous (I text the hubby and he came right away) … the nurse unhooked me and of course the vomiting began. I thought I felt a trickle, but I was told that my water did NOT break (I still think it did, but I’m not a medical professional).

Maybe 8 hours in, I started feeling cramps, like my cycle pain, so I asked “do contractions feel like menstrual cramps?” I was told it can… And then the frequency picked up and I was in pain. I looked at my husband and said “yea this is the same pain I get every month, but not at this frequency” he looked scared when I said that. He quickly came to my side and held my hand, it was about almost 9 am at this point December 8th.

My mother-in-law came, I love her dearly, but I almost had a fit because I did not want her in the laboring room. The hospital’s policy was that I could only have two people in the room (if 3 were allowed I honestly wouldn’t have cared) I wanted my aunt (who raised me, she’s like my mom) and my husband. I wanted to feel comforted, not like I had an audience that could possibly judge me. She was barely in the room 5 minutes and I found it hard to manage my pain because I felt I had to uphold a character in front of her. I have a high threshold for pain, but I can’t deal with distractions while managing pain. I didn’t want an epidural, so I was trying my best to cope with the pain. My contractions were occurring every 3-5 minutes and I was only 2 cm dilated, if that at this point. I looked at him, and he knew he had to talk to her. She left the room for a little while. Then my aunt came and I was so happy, I had started to cry earlier because she wasn’t there and I wasn’t sure if she was going to make it. My MIL now had company and the two of them were chatting away. I was happy the two of them had each other to occupy each other and my husband could focus on me.

They went into the waiting area and left me to rest… I was handling these crazy contractions like a G. The nurse was amazed, even the hubby was impressed (they could see my contractions on the monitor). Then, this black Dr came in yelling at me, and let me tell ya I was about to give her a piece of my mind, but a DAMN contraction kicked in. She had the nerve to come in my room and tell me I HAD to have an epidural. She requested it and after she left and the pain level went down I expressed my annoyance to the hubby. Soon after I calmed down and dozed off, the anesthesiologist came in and he said “you asked for an epidural?” in true Letitia fashion, I said “I DIDN’T ASK FOR ANYTHING” with an attitude. He looked, then said well do you want it, I said NO and immediately screamed in pain. We made eye contact, and I humbly said “well since you are already here go ahead”

He gave me the epidural, I didn’t flinch once, I gave him instructions told him if I clinch my hand stop, if I release my hand he could proceed. Afterwards, he told me how impressed he was with how I was dealing with the pain and the fact I didn’t budge once while he inserted his needle.

Aunt and MIL came back into room, we told them what happened, I fell asleep… Then about 4pm I started feeling intense contractions. Told the ladies I don’t feel the pain but I can feel the pressure and I have a contraction that isn’t releasing. It finally released, I laid back down, the ladies exited about 4:30 (apparently they had the hubby getting them pizza and didn’t want me to know, very smart of them, lol) and then mayhem occurred.

At 4:37pm, about 7 people rushed into my room, they told me I had a contraction that was pressing on the baby and her heart rate was rapidly decreasing and wasn’t releasing, I said yea I know, I feel it (the contraction.) Talking me through the whole thing (as they were performed each step), the Dr told me they were shifting me on my right side and injecting me with medicine in attempt for the contraction to release. They waited for about 30 seconds. It didn’t work. She then said we are going to give you a C-section (I was aiming for vaginal delivery.) In my head I’m saying, ok whatever, not realizing she meant Right now, LITERALLY NOW. Next thing I know I hear “1,2,3” I’m lifted on a gurney and being pushed down the hall, turned right, pushed into the operating room (I’m talking to myself as tears are filling my eyes, I’m alone, no one knows I’m having this baby right now, I’m scared, this is happening so fast.) “1,2,3 lift” as I’m being lifted onto the operating table. Less than 1 minute an a half (no exaggeration) I feel snip (I scream, “I can feel that) snip again (I can feel that) cut, rip, numb (they placed the anesthesia into the epidural but didn’t have time for me to go numb. My legs were locked down, so right after they got her out I went numb simultaneously)… my baby girl was born at 4:45pm.

Little did I know, the nurse had called my husband to tell him what was occurring. He was in the hospital elevator while our daughter was being delivered. I had gotten to 6 cm dilated before this emergency C-section occurred. I had labored for about 12 hours to only have her ripped from me. To her defense I did give her an eviction notice and tell her forceful removal would occur if she didn’t comply. Guess my child has my sense of humor.

December 8th, 2016 at 4:45pm Charlotte Brooklyn was born. The child whose pregnancy gave me so much courage and strength. The pregnancy that tested me and my faith. I was finally a mother at 36 years old.

I’ll Travel To the Stars and Moon for You »